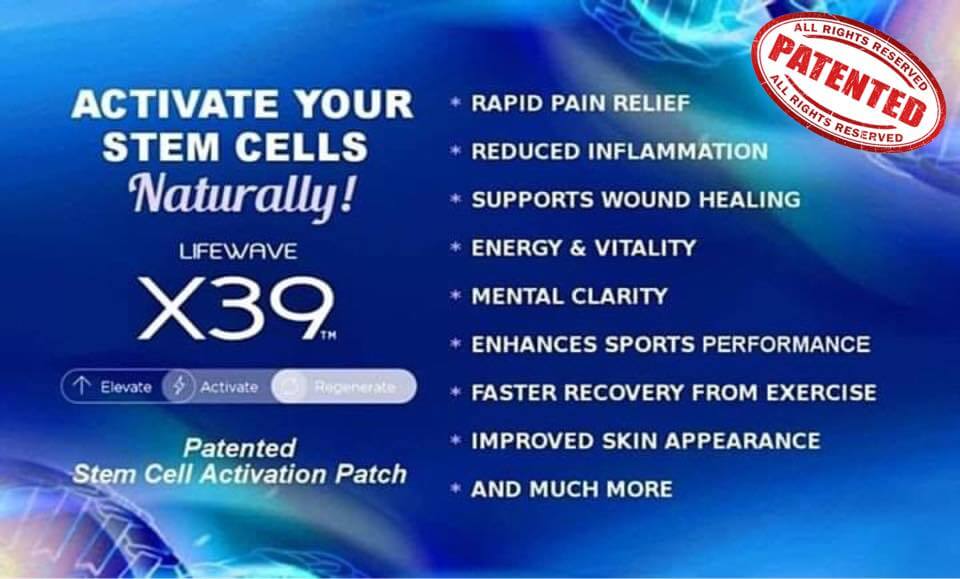 In the current climate, it’s important to keep our immune system strong by improving our antioxidant intake.

David Schmidt Scientist and SEO at LifeWave, gives us some useful tips on supplements which may help in keeping our body’s antioxidant system charged, in order to manage stress.

Watch the two videos below.

Please feel free to share these videos with your family and friends.

Business is as usual for LifeWave although you may experience slight delivery delays.

I wanted to share a bit of my own and my husband's LifeWave story
We both started the LifeWave patches just over 4 months ago now.

And we absolutely love them!!!

Before I was using them I always felt tired and my mood was constantly down.

In that state it was very hard to be motivated to do just about anything.

On top of having no energy I also had all sort of other issues that I was told had no simple answers.

So it came as a huge surprise to us that since starting to use the LifeWave patches that both of our lives changed so dramatically.

Within days we noticed the start of many benefits and soon after that we both commenced running again.

This accumulated in us both running our first 1/2 Marathon last weekend and we did do this on our wedding anniversary.
We both made it to the finish line!

First of all I think that if it was not for the patches I probably wouldn't have even made it to starting line.

We used a combination of X39, X49, Carnosine, Aeon, Glutathione and Energy patches as part of our daily fitness routine.

But after the race my knees were in a lot of pain!
Because we always have all the patches with us I quickly patched my knees with IceWave and soon after felt much better.

Later that night I patched myself also with the Aeon to speed up my recovery.

The next day I rested and started to feel a lot better very quickly.

Then on Tuesday just two days after the 1/2 marathon I felt ready to start my Regular exercise routine.

The speed of recovery was amazing.

Lifewave has been a life changer for our whole family. ... See MoreSee Less

ICEWAVE IS OUR ORIGINAL PAIN PATCH,

It takes a pair of ICEWAVE patches to do its job.

Icewave has for the most part now been superseded by AEON and X39.

This does not mean one should not have Icewave on stand by in your collection of patches.

This most faithful of servants has already saved the careers of many elite athlete.

More then just a few tennis players that could no longer tennis where able to complete their games and win finals.

Because of the help from just two Icewave patches some of them where able to play on and won million dollar prices.

This due to the fact that their own medical team was unable to do much at that time.

A few dollars worth of patches was able to win the day and the athlete his game.

Icewave is also famous for helping non athletes like you and me when we are dealing with tooth aches, menstrual pain, head pain and other such painful situations.

If you find someone in distress with pain ask them to drink water,, place X39 on the neck and AEON on the pain. Wait a few minutes and if that did not do the trick you also place Icewave as per the brochure. ... See MoreSee Less

DOES LIFEWAVE PATCHES REBUILD DAMAGED CARTILAGE IN YOUR KNEES?

Here's the answer to this question directly from David Schmidt, Scientist, CEO and Inventor of this incredible LifeWave healing technology.

David was asked this question, "Do the LifeWave patches help rebuild the damaged cartilage in the knee? Or do they just offer pain relief with patches instead of medicine?"

HERE IS HIS ANSWER ⬇️⬇️⬇️⬇️

"When using IceWave for relief of knee pain, our data shows that the patches ARE NOT covering up the pain, but providing a therapeutic effect.

One of the things we are looking at in our lab that is very exciting is the use of Aeon and Glutathione to actually rebuild lost cartilage.

In traditional medicine (orthopedics), it was once thought that it is impossible to regenerate cartilage once it has been lost. This has now been disproven with stem cell technology. What we have seen is that the application of Aeon on the inside of the knee and Glutathione on the outside of the knee appears to regenerate lost cartilage."

You can combine aeon and glutathione on every other joint and expect the same result. Using X39/X49 as well may accelerate the healing proces.

We have seen great results by supplementing with vitamin c and collagen or bone broth at the same time.

LIFEWAVE DISCLAIMER: LifeWave products, are not intended to diagnose, treat, cure or prevent any disease or medical condition. Always consult with a physician or other qualified healthcare provider before embarking on a new treatment, product use, diet, or fitness program. ... See MoreSee Less

This is amazing. Was dealing with a knee issue in a patient yesterday. Put 2 icewave patches either side of the knee on the medial and lateral collateral ligaments ..pain had gone in 15 seconds. With no other treatment. I did get asked this question as to whether the patches are a quick fix or if they actually offer a therapeutic benefit 👍